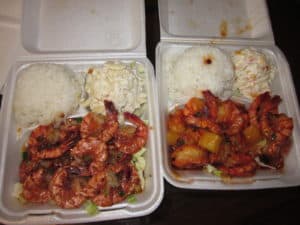 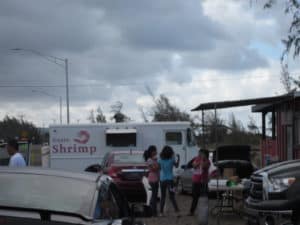 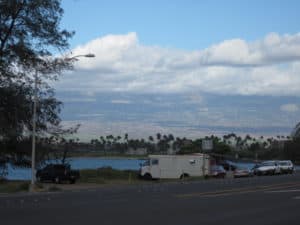 Driving along Kahului Beach Road, you may have passed the white Geste Shrimp Truck parked at what some are dubbing the “harbor food court” at the edge of Kahului Harbor, across from the MACC…but have you ever stopped to try the shrimp? Those who have already tried it have already been delighted. For those who have not, I highly recommend you give this shrimp truck a try! Same goes for visitors who have yet to try it.

With a mostly highly favorable rating of the Geste Shrimp Truck on Yelp,  my guess is that business must be pretty good for the Shrimp Truck. I actually only recently had my first experience sampling its plates and was really impressed. However, if posts on friend’s Facebook pages are any indication, apparently some may find the proposition of eating food being sold near the harbor to be somewhat questionable. Put those fears aside and just relax…it’s Maui!

I recently had the Hawaiian Scampi plate and my husband had the Spicy Pineapple plate. So delicious! Each plate comes with twelve juicy shrimp served in a local-style styrofoam container with rice and crab macaroni salad. The plates are currently $12. It’s well worth it.

A few negative reviewers complained that the shrimp was not so fresh…no one is saying the shrimp is locally grown. Others complained that a few of the veins were still there on a few pieces of shrimp…this is a shrimp truck…not a 5-star restaurant. Some even complained that it was too messy or hard work…but we are talking about peel and eat shrimp…that’s the nature of it! Part of the shell is already peeled so it’s not even that hard to remove the shell. It’s still a delicous, no-frills, large plate of shrimp.  If you were to go to one of the fancy restaurants around the island, it would easily cost you at least double for something similar, and it might not even taste as good, and you probably wouldn’t even get as many pieces of shrimp.